Tenley grew up in Newton, MA. One Christmas when she was 6 years old she got her hoped for present: skates. They were hockey skates – what a disappointment. Her parents let her exchange them for white figure skates. “Betty Cooley’s mother drove us to Bullough’s Pond in Newton Centre. Boy, did we have fun jumping over the cracks in the ice.”

The next winter Tenley persuaded her father, surgeon Hollis L. Albright, to flood and freeze the backyard. She didn’t appreciate until later years that he woke up every hour on the hour to spray water and bring the hose indoors so it wouldn’t freeze. Tenley was thrilled, however, her mother was less enthusiastic because she said all the children in the neighborhood would present their spaghetti feet to have her help them put their skates on. The next year there was no chance of that backyard ice because her father, who was a surgeon in the Army, was posted to El Paso, Texas and then Grass Valley, CA where there was no outdoor ice.

In third grade that year Tenley went to three different schools. When her father was shipped overseas to be chief of surgery at the 93rd General Hospital in Wales, Tenley persuaded her mother to take her to an ice show. It was an amateur ice show at the Skating Club of Boston (SCOB). She loved watching two sisters, Sally and Jane McGonagle, do their pair number and she was thrilled when she saw Gretchen Merrill, the US National Champion, having so much fun, appearing to fly across the ice.

When they got home Tenley said, “Mother, I want to skate.” Her mother, artist Elin Albright, gasped – during WWII the gas rationing limited excursions – but she agreed. She took Tenley skating once a month and eventually, once a week at the SCOB. 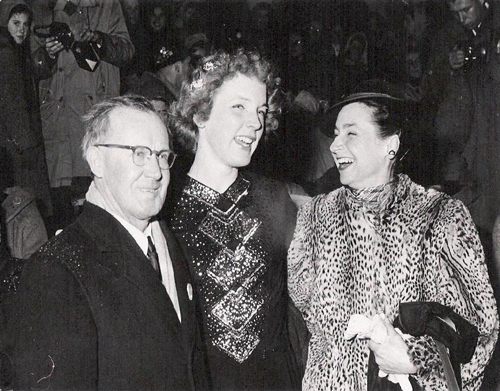 Her first lesson was with Gretchen Merrill’s teacher, Mr. Willie Frick, who was from Austria and had been known for an intricate candle dance on ice. As a matter of fact, Mr. Frick continued to be Tenley’s coach through her entire career.

Since Mr. Frick never taught during the summer he recommended that Tenley take from other teachers as well, including his own student, Maribel Vinson, who had been nine time National Champion.

She also took from Eugene Turner in Denver, Austrian Karl Schäfer in Germany and Michael Mickeler, who was also Austrian, in L.A.

It was when she was 10 years old and was at home holding her six week old cousin Lauren that she noticed the first symptom and sign of polio. Tenley said to her mother, “Would you please take the baby? I am afraid I’m going to drop her.” Her neck, back and right leg were affected but not permanently paralyzed. She was in the infectious disease hospital Haynes Memorial in Allston, MA, in isolation for a couple months and when she got out she was very weak. Her parents were told to encourage her to do something she liked before she got sick. They decided skating was ok because it was a singular sport: her parents were warned other people would be apprehensive about having their children close to Tenley and in those days nobody understood how polio spread.

She remembers very clearly the first time she went back to the rink. “I headed to the right side because there weren’t people over there. I literally stood next to the barrier and put my hands on it and crossed them one over the next over the next, so slowly, inching along. And I was so happy doing that.” From then on she appreciated the use of her muscles differently, something that stuck with her even years later as she ran down stairs at Harvard Medical School.

Her recovery was remarkable. Five months after her release from the hospital she competed in Philadelphia and became New England Juvenile Champion. The announcer caller her name as “Teuley Albright,” misreading Maribel Owen’s handwriting. More surprising, the person who came in second was Jane McGonagle, her inspiration. “That was one of my first tough lessons in skating. After I beat her she stopped skating. I wasn’t supposed to win. I didn’t know how to handle that.” Years later Tenley was pleased to be given a honorary membership at the Philadelphia Humane Society and Skating Club.

With Dudley Richards, who taught her to drive and took her to her first Harvard dance when she was 14, she won both New Englands and Easterns pairs championships in 1951. Dudley was one of Tenley’s 22 friends who died in the 1961 US Figure Skating Worlds Team plane crash over Belgium that killed 72 people.

Tenley arrived early in Cortina D’Ampezzo, Italy for the 1956 Olympics to acclimate to the outdoor ice and altitude. “We were skating outside in the Dolomite Mountains and I remember taking off in full sunlight and landing in shadow.” But she missed out on the Opening Ceremonies due to an injury that brought her skate blade to the bone of her landing leg.

The morning of the competition in the warm up she tried the simplest jump there is – a waltz jump – and fell flat. When they called her name she took the ice and said to herself, “I don’t know how I’ll get off the ice afterwards, but I know I’ll get through.” Her music, Tales of Hoffman, the Bacharole, began and the European crowd joined in, humming along to the music. “That actually lifted me up,” she remembers, feeling the intense emotion today.

After the experience at the Olympics and the moving homecomings – these were the first televised winter games and she was welcomed as America’s sweetheart – Tenley, who had always had an interest in medicine from the time she was eight and a half, was anxious to get to medical school. Before finishing Radcliffe she entered Harvard Medical School, expecting to become a pediatrician. She never turned pro or joined shows, as many skaters did, and maintains amateur status today.

Tenley did trade one sort of blade for another, though, becoming a surgeon in clinical practice with her father and her brother, Nile Albright. They practiced in Boston, where she continues to be on the faculty at Harvard Medical School. In 1961 she married lawyer and philologist Tudor Gardiner and the two raised three daughters, one of whom is a professional skater and choreographer, Elin Schran.

After 23 years of being on call every other night and every other weekend, Tenley turned to health advocacy and research. In 1981 she married international commercial real estate developer Gerald W. Blakeley (Jerry) and in 2005 founded MIT Collaborative Initiatives (Massachusetts Institute of Technology).

MIT Collaborative Initiatives promotes a systems based approach to solving deep-rooted societal issues by engaging experts from a broad range of disciplines both within and outside the scope of a problem.

She is also on the board of the Bloomberg Family Foundation and is a member of the Center for the Study of the Presidency and Congress and serves on its National Council of Advisors and its Health Care Commission as well as its Innovation, Comparative, Advantages, and Synergies Team (ICAST).

As Chair and member of the National Institutes of Health National Library of Medicine’s Board of Regents she developed a special interest in the potential for new technologies to advance medical education and training, surgery, and medical practice.

Currently, she is a consultant to the NLM Board of Regents. She serves on the Board Subcommittee for Outreach and Communication, and chaired the Advisory Board for the national exhibit “Changing Face of Medicine: Women in Medicine.” Earlier, she served on the initial advisory committee for the NIH Women’s Health Initiative.

Previously, she was the first woman officer of the US Olympic Committee in 1980 and helped develop the Athletes’ Advisory Committee. She was appointed by the Secretary of the Department of Health and Human Services and the President as a delegate to the World Health Assembly for four years and has chaired the White House Fellows Selection Committee for the northeast region. She has also been involved in international polio eradication efforts. Tenley has received the Research!America Advocacy Award for her work to advance medical and health research. She is also the recipient of the 2011 White House Fellows Valenti Award and eight honorary degrees from universities and colleges.

Changing the face of medicine